Mattie’s Story: Saved from a semi-truck’s roof on the way to slaughter 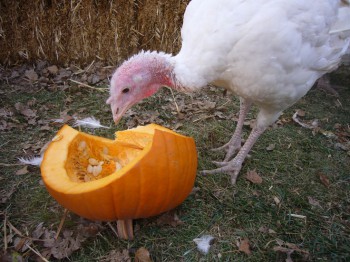 As the sun rose over Stockton on a November morning in 2010, Mattie the Turkey Hen arrived at Harvest Home Animal Sanctuary. Mattie’s journey to safety is a dramatic tale of survival, bravery and pure luck.

One week before Thanksgiving, a feed delivery employee of a Northern California turkey producer was driving behind a company live haul truck that was transporting two thousand turkeys to the slaughterhouse. The employee noticed a petrified bird on top of the semi-truck barely hanging on as the vehicle drove 50 miles per hour. Luckily, the employee flagged the live haul driver to stop on the roadside. The turkey was retrieved from peril.

The driver of the live haul truck apparently knew the turkey was on top of the semi as he left the turkey ranch. The catching crew that loaded the turkeys on the truck left the bird on the top of transport cages as a “joke”. The driver reportedly told the concerned employee that he was just waiting for the bird to “fly off the truck and die” as he drove to the slaughterhouse.

We were thrilled to open our barn doors to Mattie. Within minutes of arriving, Mattie was quick to intently peck the hands of the caregivers of the sanctuary. See more portraits of Mattie.

Personality: Mattie is as subtle as a pink elephant in a dressing room. She will get as close to you as humanly possible, even if that means standing on your stomach!