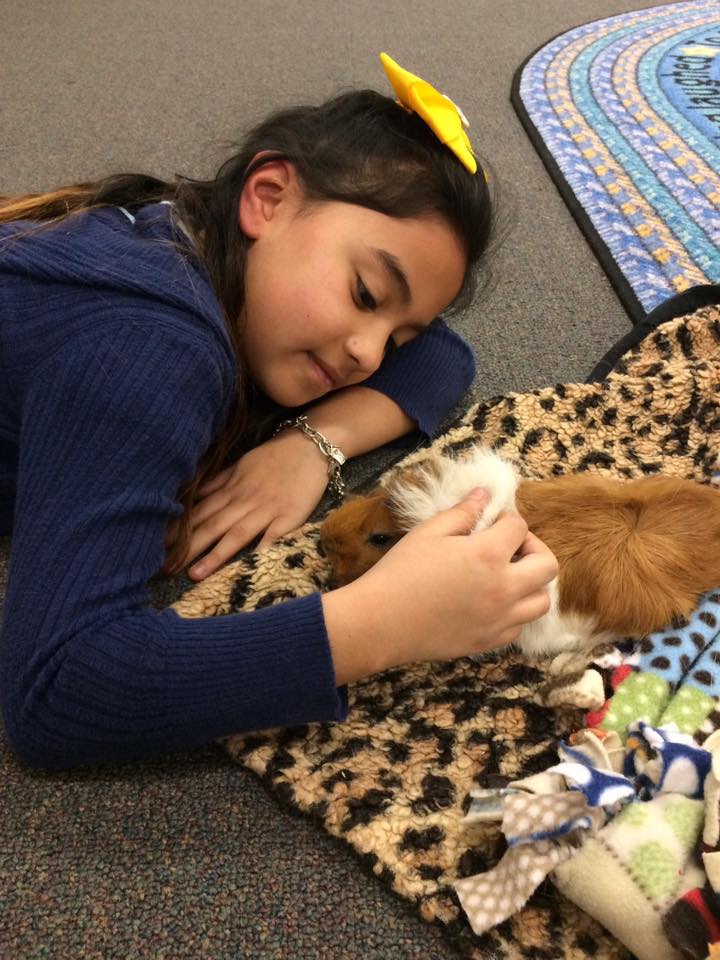 STOCKTON – To a small child learning how to read, picking up a book and pronouncing words to an adult can be quite intimidating.

But two guinea pigs named Estella and Pip don’t mind being read to. Especially if there is spinach, carrots and dried cranberries to munch on.

Dozens of children got the chance to read to and touch rescued farm animals at the Weston Ranch Library on Thursday afternoon, brought in by Christine Morrissey from the Harvest Home Animal Sanctuary.

Morrissey said Thursday’s Rescue Readers Club “reading to the animals” event was the first the sanctuary has done, and hopes for more similar events to be done every month at libraries across San Joaquin County.

“Our organization has been around for a long time – about 10 years – but the Stockton community doesn’t know much about us,” she said.

They also educate the community about proper humane animal care along with providing rehabilitation for animals such as goats, birds, chickens and rabbits. If possible, many of the animals are lucky enough to find loving homes.

Sitting in a tight circle, children giggled as they petted Estella and her male companion Pip. Little Estella came to the sanctuary with paralyzed hindquarters after a child at her previous home squeezed her too hard, breaking her back.

She lit up social media in 2015 when Harvest Home shared her story, seeking donations to buy her a tiny wheelchair. They succeed and then some, and now, Estella can roll around freely as much as she pleases.

Along with the guinea pigs was Candy, a gray silkie chicken, and Vinnie, a 6-year-old white dwarf rabbit.

Left uncared for in a backyard in San Jose, the rabbit developed severe eye infections that went untreated and left Vinnie blind in both eyes. Before he came to the sanctuary, he was injured after a rat broke into his closure and bit him.

“He’s had a pretty rough past, but he’s good now,” Morrissey said, reassuring the children. “He’s got a lot of friends (at the farm).”

Erica Carrillo, armed with her cellphone, took pictures and videos of her twin daughters Natalia and Deztyni, both 8, as they fed the guinea pigs.

“We have three dogs at home, and we’ve never seen these kind of animals up close like this before,” Carrillo said.

She takes her daughters, both students at Venture Academy, to the Weston Ranch Library every week. Animals are a big interest, and it was only natural to spend the afternoon with the smallest furry creatures.

“They love animals and they love reading,” she said. “It’s a great combo.”

For more information on the Harvest Home Animal Sanctuary, go to harvesthomesanctuary.org.