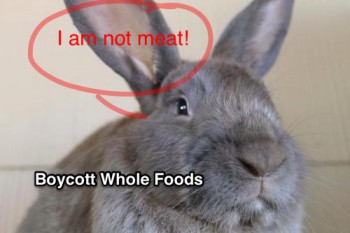 Harvest Home Animal Sanctuary joins with House Rabbit Society, SaveABunny, and other rabbit rescue groups, in calling for a boycott of Whole Foods Market until they end their pilot program of selling rabbit meat in their Northern California stores, as well as a handful of other locations.

We estimate that there are anywhere from 3-9 million pet rabbits in the United States, and we know that they are America’s third most popular companion mammal.

Whole Foods, a store that is shopped at by millions of consumers who care about animals and don’t want them harmed, will now be adding, for the first time ever, a widely beloved pet to their meat cases in order to bring in the profits of those shoppers who have requested them. The rabbits raised for meat are exactly the same as the rabbits living in our homes, snoozing on our couches, begging for treats in the kitchen, and trading nose bonks with the family cat.

These are the rabbits that will be bred over and over (Oz Farms, one of the growers who will be supplying Whole Foods in Northern California brags that “one rabbit can produce up to 320 pounds of meat in a year in just a small area” – Santa Rosa Democrat) until they are spent, while their babies (called “fryers”) are slaughtered, screaming in pain.

We are calling upon our supporters, website visitors, and social media followers to immediately stop shopping at Whole Foods stores until the company stops selling rabbit meat.