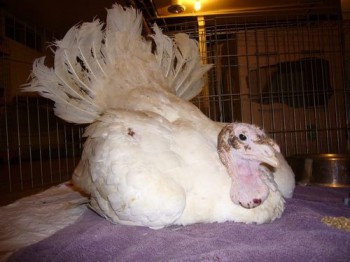 In October 2007, Arroyo fell off a slaughterhouse-bound big rig carrying 2,000 live turkeys. Bloody and paralyzed, he was left for dead on a roadside in Calaveras County. When Harvest Home Animal Sanctuaryrescued Arroyo, he received urgent medical care and tons of TLC. During his four months at the sanctuary, Arroyo would never regain the ability to walk again. However, we were very grateful to provide a safe refuge for sweet Arroyo before his passing in February 2008.