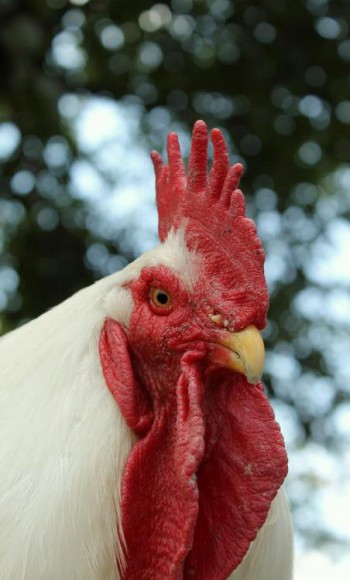 Rescue Story: Adrian, an ex-“meat” bird, was literally waiting in a crowded crate covered in a blood-manure mixture on the kill floor as each of these flockmates had their throats cut at local poultry slaughterhouse. In a random twist of fate, Adrian and seven other of chickens were granted a stay of execution. Within an hour, he was on sanctuary soil—a free bird!

Relationship Status: He is madly in love with Kitty the Hen.

Likes: Adrian loves when Kitty preens and pecks his face for leftover food or tiny dirt particles. He also enjoys watching the sunset over the Altamont Hills with his buddy I-Hop the Rooster and Kitty.

Dislikes: The daily invasion of the Muscovy hens of “his” yard and the mere presence of Lance Pants the Bantam.